Eco-friendly fashion: Made in Vermont

Eco-friendly fashion: Made in Vermont

Tara Lynn Scheidet is in a beautiful place geographically and business-wise. 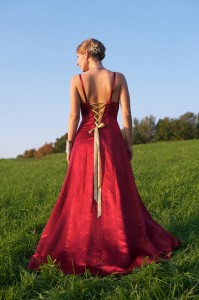 “Tatiana” is a princess-seamed wedding gown with hemp-silk layers from the Goddess Collection. Price is $2,250.Photo/Jay Ericson

“I increased the price of my gowns and that helped tremendously. I’m really excited about this year.”

Things are usually dead this deep in winter, but she has 11 orders and is in the process of hiring an apprentice. She attributes the influx to her new website: www.taralynnbridal.com.

But accidental press and word-of-mouth of her sustainable wedding dresses made from natural, organic and repurposed fabrics fuels the demand for her one-of-a-kind gowns that are made by hand and with vintage sewing machines. 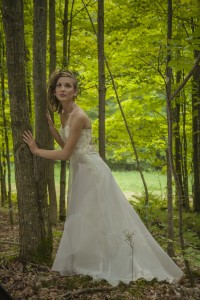 This ethereal wedding dress by Tara Lynn Bridal is made of hemp, organic silk and wispy hand beaded flowers.

“I’m in the Northeast Kingdom, the middle of nowhere. People come from Colorado for fittings. Last year, people came from Canada, Pennsylvania, Chicago and New York,” she said.

One Michigan bride-to-be will visit twice this year. This Wednesday evening, Scheidet has a virtual fitting with a client in Lincoln, Neb., to whom she mailed the dress.

“She sends digital images. On the new website, the clients have a private portal to see gallery images of (their) dress-in-progress. We can communicate back and forth. The client portal keeps all measurements right there in your own personal gallery that you can share with friends and family or keep it a surprise.”

She offers a Custom Collection (all about you), Tara Lynn Collection (eclectic and ethereal), Vintage College (1950s classic DNA) and Goddess Collection (bohemian/hippie/gothic).

“I’m working on three new gowns that involve prints. I did a custom gown for one girl. She called and wanted ferns and poppies, and her budget was ‘X’ amount of money,” Scheidet said.

She printed ferns on layers of organza silk.

“When the dress moved, it was really pretty. I’m working on this collection, block prints of flowers. I’m kind of inspired by lichen, and I’m doing embroidery on top of that,” she said. 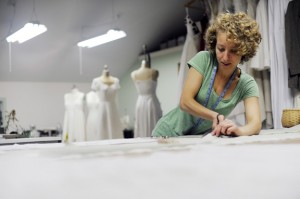 She first came to Vermont in the seventh grade to attend an event with a friend’s family.

“I wanted to live here,” she said.

As a child, she made doll clothes and furniture for two large doll houses.

“My grandmother and grandpa were upholsterers. It’s not like I ever watched them do it. My grandmom just passed away last week. Everyone is so glad I’m sewing. They said if grandpa could see what I was doing, he would be so happy.”

She taught herself how to sew and made her own clothes in junior high.

“Weird clothes, I used to get made fun of all the time,” she said. “I looked at Harper’s Bazaar. They do the runway-shot page with runway shots all collaged together.”

Her hair and makeup was influenced by the fashion magazine. She ripped apart her mother’s ’70s duds to transform bell bottoms into dresses and overalls into skirts.

Though she thought about studying fashion in California and Boston, they were not options. FIT was not only the best, but the most affordable.

“I’m so happy I went there. I love FIT. My cousin is there now, and she’s enjoying herself. She’s going for fashion merchandising.”

Scheidet majored in fashion design with specializations in tailoring and knitwear.

“Which are two complete opposites … I wanted to learn everything I possibly could. I stressed myself out. I took everything from leather design and intimate apparel. I got a certificate in women’s tailoring and knitwear.”

She got married to her mechanic/husband, Evan, right after graduation. He remained in New York, while she found a job to convince him to join her in the Green Mountain state. She discovered designing knitwear hats for Turtle Fur was not her forte. An hour in the other direction, she was hired as an associate children’s designer at Garnet Hill, a retailer of bedding and women’s and children’s clothing, in Franconia, N.H.

She and her husband lived in a little log cabin on 92 acres with no water, no utilities and no nothing. It took seven years to have electricity and indoor plumbing.

Once she was on the grid, she resumed making her Earth Bitch jackets. She’s made natural-fiber clothing since 1999.

“Earth Bitch was really my philosophy; to make clothing not only sustainable but (clothing that) sent a message. You’re wearing something on your back that educates people about what is going on in environmental protection. The Butterfly jacket was sexy and beautiful. It was all extinct or endangered butterflies. People said, ‘I didn’t know butterflies were endangered.’ My purpose is to educate people about endangered species and hemp,” Scheidet said.

“This plant was grown all over the U.S. It was made illegal. Growing this plant in America again, we could save thousands of acres of trees and use it to make paper and food. It’s a crime it’s illegal to grow it in America. The minute it’s legal, I’m growing it on my property.”

She follows in the presidential footsteps of George Washington, Thomas Jefferson and James Madison, who grew hemp as a cash crop, as did many farmers of the 17th, 18th and 19th centuries.

“The first draft of the constitution was written on hemp paper. People went on a reefer-madness movement and made it illegal. It’s grown everywhere in the world but the U.S.,” she said.

“Chiara” is a strapless gown with a full-circle pleated skirt with two hidden pockets from the Tara Lynn Collection. Price is $2,600.Photo/Jay Ericson

During her three-year stint at Garnet Hill, she went to a trade show in Paris. The trend forecast: go green.

“Young people demand a better future, and green is the future. I’m sitting there, I said, ‘This is it, my chance to get out there.’”

She had a small collection at The Hempest in Burlington. Her Earth Bitch wearable-art jackets are dedicated to endangered species.

Scheidet met eco-model and environmentalist Summer Raynes Oakes, who told her about the World Wildlife Fashion show in San Francisco. Scheidet applied, and her jackets were accepted.

She asked Garnet Hill for a week off to fly to the show. In a week, she and a girlfriend made an Earth Bitch and a Butterfly jacket to wear.

People were feeling the jackets in Cali and wanted to know where to get them.

“I said I made them. Everyone loved them. To make a long story short, I couldn’t wait to start my line,” Scheidet said.

Garnet Hill wanted her to sign a non-compete clause. She refused and was sacked.

“It’s the best thing that could have happened,” Scheidet said. “Here I am now.”